A construct is a characteristic of an argument.  Construct maps use research on student learning as well as expert knowledge to separate the construct into distinct levels that characterize students' progression towards greater expertise (Wilson, 2005).  The writing relevant-supporting evidence (RSE) construct map (see below) has three levels: 1) some RSE 2) RSE for claim, and 3) RSE for science & claim. 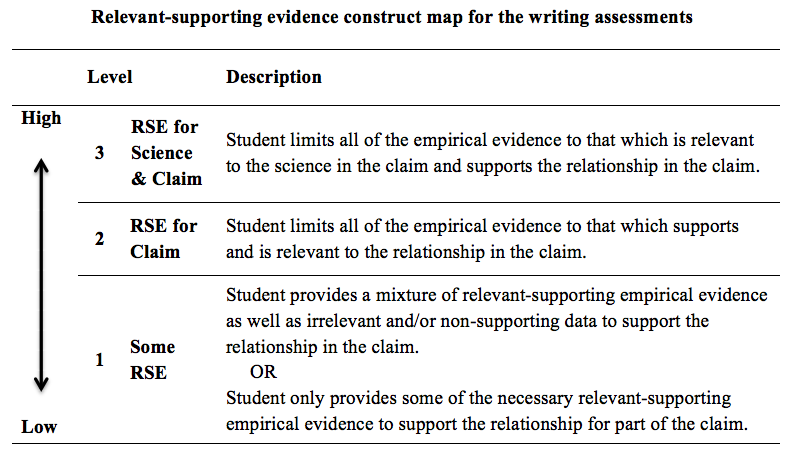 We developed four different writing items.  While the topic of two of the items focuses on earthquakes, the other two items focus on volcanoes.  The students’ response to a writing item is used to place their ability at one of the levels on the construct map.  For instance, if a student only uses a personal story to justify their argument, then he would be placed at the “no RSE" level of the relevant-supporting evidence construct map.  However, the relevant-supporting evidence construct is only 1 of 5 different ways the students’ written response will be assessed.  In addition to relevant-supporting evidence, we encourage you to consider forms of justification, sufficiency of evidence, multiple views, and reasoning (maps and rubrics are provided for each).  While the students’ of highest ability will score high on all of the constructs, students of lower ability levels may have different strengths and weaknesses.

It is our hope that, over time, students’ abilities will move towards the “RSE for science & claim” level of the construct map.  To assist teachers with this goal, we have developed teaching strategies. The following teaching strategies are intended to support students in moving to higher levels for Forms of Justification, Relevant Supporting Evidence and Sufficiency of Evidence, since we've found that it is difficult to focus exclusively on one area when teaching, and improvement in all of these areas can be seen when focusing on similar learning experiences that enhance the learning of all levels at once.

Sandoval, W. A. (2003). Conceptual and epistemic aspects of students’ scientific explanations. Journal of the Learning Sciences, 12, 5-51.